There are people, who the more you do for them, the less they will do for themselves.
– Emma.

It’s getting to be that time of year. As much as we don’t want to admit it, summer will be coming to an unofficial close (first day of fall isn’t until September 23rd) and kids will be going back to school. *Cue the girl on the commercial screaming at the first fallen leaf.* I’ll be honest – I can’t lie to you, it was always my favourite time of year.

Zach will be starting Kindergarten in a couple weeks. With that, the parent in me feels nervous and wonders how he’ll do – a misleading reflection on how I’ve done as a parent up until now. The teacher in me knows every child is different – he is going to have his strengths and weaknesses as everyone else, but will spend this year growing, learning A TON, falling in love with learning, and finding “his place”.

What can I do for my kids to adequately prepare them for their official introduction into what is lifelong learning? I’ve realized it’s more about what I can STOP doing.

I have good intentions. I have the BEST intentions. I love my children. It’s only natural to want to help them avoid hardships, make life easier. Unfortunately – as they grow up and, in this case, have to go to school, their easy life may not mesh well with a classroom of 20 other 5 year olds who also have been having easy lives.

There is so much more my children can do for themselves than I realize.

I remember 3 years ago – when I was starting to prepare Hailey to go to school for the first time. Hailey had never been to daycare in her life. She had spent all of her time with either me, her dad, or one of our many other extremely supportive friends and family. She was raised by a village – a very loving village who wanted to make things easy for her.

So here I was worrying about all of the skills I assumed she would need to know before going to school.  I created all kinds of fun fine-motor activities, we worked on writing her name, using scissors, identifying our letters, numbers and shapes, you name it, we probably did it.

I didn’t even notice what I was forgetting…

At this time my best friend was spending her summers with kindergarten-aged kids at a daycare centre and started telling me about the kinds of things these kids would do for themselves. They would pour their own milk, dish up their own food and clean up after themselves, scraping their plates and wiping up their spills. They would dress themselves – get themselves ready to go outside, which means zipping their own zippers and changing their own shoes. My jaw dropped. Why hadn’t I even thought of this?

I came to the conclusion that I was a creature of both habit and convenience. I was so used to doing all of those things for her, neither of us thought any differently. Plus, it was so much easier and faster for me to do it… it’s MORE work to let those things go and just stand on the sidelines and watch.

But now I know – one of the most important things I can do to prepare my children – is to step to the side.

Parenting from the sidelines isn’t easy. It means being actively engaged in what my children are doing. I need to let them explore on their own, while watching closely enough to offer positive reinforcement/encouragement, to model appropriate skills and behaviour and to know when they need me to either step in or let go (that’s the hardest one).

With all that said – these next two weeks for me

mean two more weeks I can spend on the sidelines. Time’ll be spent showing them I’m here, cherishing the time I get to be here, and helping them to realize – I’m not going anywhere, so they can independently go everywhere. 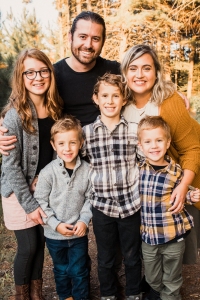