I mentioned in my last post how much I enjoyed hearing how well my babies were doing. What I didn’t mention was how awful it feels when you hear they aren’t doing well. It doesn’t come from a whole crowd of doctors and nurses standing around your babies… it comes from one doctor and a closed curtain.

My first NICU post relayed that both boys had had head ultrasounds at 1 week old and that both of them were suffering from a Grade 1 brain bleed (Grade 1 being the smallest grade of bleeding – small victory). Super common in premature babies, the last trimester is spent developing the blood vessels in the brain, meaning premature babies have very weak blood vessels that are prone to rupture. Alas – because of this – they would have a follow-up head ultrasound in a week’s time. This is the part that I didn’t previously mention.

I distinctly remember the moment the doctor came to talk to me. I just happened to be pumping (so glamorous) and she told me she could come back to talk to me later. Naive me, I figure, no big deal – I’m covered, and so many people walk in and out as I’m either feeding my babies or pumping, whatever she had to tell me she could tell me while I’m “in the moment”. She proceeded to close the curtain and pull up a chair.

The doctor filled me in on the good news first – Fin’s ultrasound looked as it was expected to look, the bleed was resolving on it’s own and his brain was developing beautifully.

The bleed on H’s brain had subsided as well, but the doctors noticed something on the ultrasound they hadn’t before. It seemed that at one point or another, our H had suffered a lack of oxygen to his brain. This has caused some permanent brain damage to it’s left side. Unfortunately, his ruptured membranes, living without fluid for nearly 2 weeks, his small size, along with his apnea and bradycardia, could have all worked against him in this way.

As she explained it: there is an area of our brain called the “periventricular area”. When this area doesn’t receive adequate blood supply, the tissue will die and be replaced by a fluid-filled cyst (unharmful). Nerve fibers are by consequence lost in this area of the brain, a permanent thing that cannot be reversed – white matter damage.

She couldn’t tell me what this was going to mean for our H as there are no physical signs of this condition during the newborn stage and it could take up to a year for us to notice any problems in his development. The range in terms of how it will affect his function is immense – meaning, his brain could technically overcompensate for the damaged areas and he will continue on as a completely healthy little man, or, he will need some help as he grows older – it could be to the point of having motor control problems on the right side of his body, which may or may not be successfully dealt with through physio and occupational therapy.

The tears started. Just picture me, sitting there, discretely double pumping, while trying to manage the sudden onslaught of tears with a kleenex handed to me by my favourite nurse, in front of one of the most sophisticated looking doctors I have ever met. The kleenex didn’t stand a chance and within seconds I was handed a new one.
.
After going around in circles a few times, the doctor realized she had started repeating herself, asked me if I had anymore questions, gave me a sympathetic glance and told me to contact her if I did happen to come up with any. I thanked her profusely and proceeded to shut the pump off. I sat quietly in front of their bed for a few minutes, just staring at them both, wondering what all this would mean.
.
I left my boys that day feeling defeated. I relayed the information to K and my mom hoping to make more sense of it through the process, but to no avail- I just welcomed a couple of friends to my “feeling defeated” party.
.
I frantically began searching for answers. I joined a PVL support group and tried to garner as much knowledge as I could – trying to figure out what the odds were for him to be the perfect little man I had expected him to be. No such luck. No such answers to be found. All that I kept reading was ugly, severe and downright scary.
.
Until I found a blog. And my outlook changed completely.

Micro Preemie Twins: The Story of Holland and Eden

Holland and Eden were born at 24 weeks gestation, giving them the title “micro preemies”. At this gestation they have only a 50% survival rate, as opposed to my boys who were born at 29 weeks, with the title of “very premature babies”, and had a 92% survival rate.
Holland and Eden are now 9 years old. They have gone through so much in their 9 years as a result of their prematurity. In 2005, Eden had an MRI which showed periventricular leukomalacia, which has ultimately caused cerebral palsy – at that point it was unknown what the severity of the cerebral palsy would be.
Through their blog, I read of the trials that had kept coming their way, that I assume are still coming their way. But what captured my attention the most, was the pictures. What I saw in the pictures wasn’t all of the unbearable procedures and circumstances, but two beautiful girls. Two PERFECT girls. In every photo, a smiling face.
.
I realized then, that no matter what – H is already perfect.
And I knew I wanted to write. I needed to write. I needed to put my story out there for anyone else like me searching for answers. Knowing I could potentially impact someone the way that Holland and Eden’s story has impacted me, has brought me here.
.
I still need constant reminding that H is going to be ‘ok’. This is where my wonderful husband has come in handy. He has oh-so-cleverly adopted the slogan, “have the day you have.” He tells me to relax and let H, “have the day he is going to have.” If anyone out there has seen the movie, The Odd Life of Timothy Green, there’s a scene in the movie of the nervous new parents dropping their son off at school – I included a 30 second clip of that scene here:
.
H will be followed for the next 3 years of his life. We will be visiting a team of specialists at the Children’s Hospital once or twice a year, where they will monitor his development closely – when or if we do see a delay, he will have the earliest intervention possible, which will be key to helping him overcome anything, say, overcomeable (and yes – I made up a word).
We don’t know what is in store for him. But, really, who knows what is in store for anyone? No one knows what’s hiding around the corner. We’re not supposed to know. What we can count on – is that there is something there; hiding. What all of this with H has opened my eyes to, is that I need to spend each of these perfect days (as they are right now) enjoying my family – because we only get 1 day like today, and we will eventually have to turn that corner, where there won’t be the option to turn back. 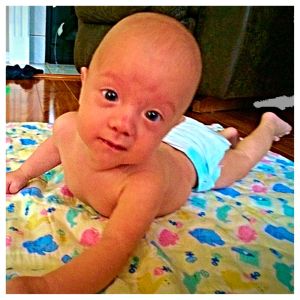 1 thought on “One Doctor and A Closed Curtain – Periventricular Leukomalacia”